Archie was a character from the comic series of The Mask Strikes Back.

Archie was a fan of Big-Head along with Rick, Ben and Hugo who hung out at Archie's apartment.

Archie was the most intelligent of the four and suffered from asthma. He kept a chrysalis in his apartment which was very precious to him and he hoped one day he would see it release a butterfly.

Rick found a mysterious jade coloured mask which gave it's wearer the looks, characteristics and powers of Big-Head.

Rick, Ben and Hugo all took turns in wearing it, but all later discarded it. Rick and Ben's reasons being that they couldn't fully control themselves with the powers it granted and Hugo as it was making him see the world in a terrifying nightmarish way.

After also attracting the attention of Lieutenant Kellaway and the police, they decided to dispose of the mask before it got them into anymore trouble, so it was handed to Archie.

Archie however put it on and decided to become a crime fighter to change Big-Head's persona as a killer to a national hero.

After taking care of criminal Boris Stoika and a sniper, he then went to the zoo where he let loose various animals and dressed them in superhero clothing to help with his crusade against crime, but they all went in the opposite direction.

Archie then came face to face with Walter and they fought. Walter was eventually arrested by the police, but managed to escape and continued to fight Archie. Just as he was about to deliver the final blow, one of the lions, Archie has released, charged at him and knocked him into the lake.

While Rick, Ben and Hugo watched, Kellaway told Archie to hand him the mask, stating that the object was too unpredictable, even stating that he had worn it himself to help others, but had failed. Archie then removed the mask and was about to hand it to Kellaway when Walter emerged from the lake and seized it. Walter put it on, but it didn't seem to work for him.

Angry, Walter then flung the mask far into the distance, much to Kellaway's annoyance who had wanted to get rid of it once and for all, while Archie breathed a sigh of relief. 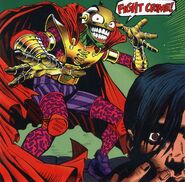