The Mask Wiki
Register
Don't have an account?
Sign In
Advertisement
in: Characters, Females, Villains,
and 3 more

Davida Steelmine (real name Vicky Pratt) is a character from The Mask: The Animated Series.

In High school, Vicky was the prettiest and most popular girl in school. Prom queen, student president, etc, and object of Stanley Ipkiss's distant affection, though she did say years later that she had an equally big crush on him.

Years later, Vicky became a highly successful stage magician known for her skill in magic as well as her beauty, taking on the name of Davida Steelmine. She would try to use her skill in illusion to perform criminal acts. Her magic skill while incredible is not actual magic, only smoke and mirrors.

Stanley's alter-ego The Mask saw her perform at the Coco Bongo and became infatuated with her, but Davida didn't return his feelings and saw him as nothing more than a nuisance as she only loved the man behind the mask instead. However Stanley was horrified to find out that his high school crush was now a criminal and urged her to give up her criminal ways, but she refused and so Stanley puts on the Mask and The Mask despite still being infatuated with her decides to stop and capture the crafty magician and turn her over to the authorities, but being a expert illusionist, she managed give him even ground despite having no powers and she manage to escape, but was presumably caught again by The Mask. 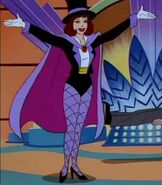