Edge City is the home city of Stanley Ipkiss and the main setting of The Mask comic series, the film and the animated series.

It is a large American city filled with skyscrapers, apartments and heavy industry factories. It is likely to be located in the American East Coast as its skyline and architecture bares similarity to New York City and New Jersey.

The city's government is somewhat corrupt and incompetent as it is run by Mayor Tilton, who uses the city's funding for statues of himself and elaborate celebrations. The city's police force is large and resourceful but heavily idiotic when solving crimes or helping the citizens.

Its many known landmarks are the Coco Bongo nightclub, Landfill Park, the Edge City Harbor, City Hall and the Mega Mall.

In the Animated series season 2 premiere, A Comedy of Eras, Edge City existed since the time of the Salem Witch Hunt as a small pilgrim village. Many of the characters' ancestors who lived at the time resemble them in their physical appearances and personalities; Lt. Kellaway and Doyle's were the town sheriff and deputy, Peggy's was the local town newspaper reporter, Charlie Schumaker's was a scheming tomato salesman, Walter's was a pull horse for Charlie's tomato wagon; even Agnes Peenman's ancestor lived at the time.

The Mask driving psychotically with Jerry by the city.

Stanley and Tina in the park.

The Mask in a street. 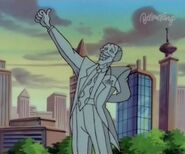 Edge City in the game.

Peggy and Milo at a hot dog stand in downtown Edge City.

The Edge City Children's Hospital with Pretorius' walking House of Tomorrow almost about to hit it.

The Edge City water tower, home of the Goofalotatots.

Edge City Hall covered in toilet paper, thanks to The Mask and the Goofalotatots.

Edge City Zoo from the episode, "Mutiny of the Bounty Hunter."

Stanley and Milo looking at the city skyline in the season 2 premiere, A Comedy of Era.

Alternate Edge City under Dr. Chronos' rule in A Comedy of Era.

McPrison for the Criminally Insane in the season 2 episode, Broadway Malady.

Edge City Nuclear Plant in the episode, The Terrible Two.

Add a photo to this gallery
Retrieved from "https://the-mask.fandom.com/wiki/Edge_City?oldid=16600"
Community content is available under CC-BY-SA unless otherwise noted.