The Mask Wiki
Register
Don't have an account?
Sign In
Advertisement
in: The Mask, Characters, Mask wearers,
and 3 more

Stanley meets her in Edge City Bank and after some encouraging from Charlie he asks her to come to his apartment. Initially unsure, she goes to Stanley's apartment, but the date doesn't go as planned. Evelyn accidentally puts the mask on and becomes Eve, the first female Mask of the show.

Eve in no time at all shows herself to be the opposite of her unmasked self; sultry, confident yet loud, telling Stanley how she feels about him while trying to kiss him and calling him her "Screwball Rabbit", and getting distracted by a bowl of pork rinds, which she devours in rapid succession. She also gives him hard hugs and forceful kisses, but like The Mask, she does have self-control despite her lack of inhibitions. Eventually, she decides to take herself and Stanley out on a 'romantic' date to the Coco Bongo where she whipped him about the dance floor, which she accidentally throws him to the ceiling but she rescues him from it and takes him to top of the roof to stargaze, and to make up for accidentally him through the ceiling by hugging him lightly and giving out gentle kisses only for Stanley to be captured by a helicopter in a trap meant for Eve set up by Pretorius.

Getting serious, Eve then went on to save Stanley from Pretorius, using her newfound ability to change her appearance to help her survive all attempts meant to kill her. Pretorius, having spent the entire episode searching for a bride, tries to convince her to marry him, but predictably she rejects him and rescues Stanley. However, Pretorius got his body to activate the button to bring the meteor to Earth while she was distracted trying to kiss Stanley. Although she stops the body, she fails to stop it from pressing the button in time. Stanley tells her to use her powers to stop the comet and though she would probably do it she once again tells him to say it in French, prompting an annoyed Stanley to take the mask off her and do it himself. However The Mask gets caught by Pretorius who removes the mask and attempts to destroy Stanley. But Evelyn uses one of Pretorius' weapons to save him, openly declaring her love for Stanley, with no memories of how she ended up in Pretorius' lab in the first place.

Later she and Stanley discover they have very much in common, but they decide to break up after having different views on the behavior of their dogs.

Eve is almost the exact opposite of Evelyn. She is more confident, much taller and has a louder voice. Dressed like a stereotypical vamp with her alluring red split leg dress, blue eye-shadow, gold jewelry, red high heels and red lipstick. She is also wacky, impulsive, fun loving, uninhibited and not afraid to show people how she feels, as shown when she declares she is madly in love with Stanley and calls him her "Screwball Rabbit", even though she has only known him for a short amount of time. Despite being uninhibited, Eve does show she has self-control like Stanley's mask persona as she doesn't try to do anything to him other than being too strong towards him. She is also fiercely protective of him and goes on the offensive when Pretorius kidnaps him. Like all the other mask wearers she can change into anything she wants, including a female Rambo and an Opera Viking.

Eve gives out hard hugs and forceful kisses to Stanley due to being out for the first time and is more wild than Stanley's mask persona as she took Stanley out to the Coco Bongo and started throwing him around while dancing, clearly forgotten that he is not like her, but after she accidentally throws him through the ceiling by throwing him up towards it and after getting him out of it, which she sees him shaking and gets told by him that he is frozen in fear because of her, she feels bad and starts to control her wildness by giving him gentle hugs and light kisses, showing like Stanley's mask persona, Eve has a good heart and knows when she's gone too far with her wildness.

However as it would later turn out Evelyn has gained some of the qualities of her Mask persona after rescuing Stanley from danger. Gaining confidence to raise her voice above a whisper and yell at Pretorius while declaring her love for Stanley.

Whist wearing the Mask Eve's accent is that of a southern American female. 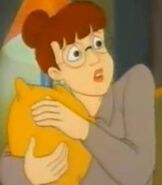 Eve trying to get Stanley to come over to kiss her.

Eve being all sweet, adorable, and in a purple dress.