The Mask Wiki
Register
Don't have an account?
Sign In
Advertisement
in: Characters, Jack Russell Terriers, Males,
and 5 more

Milo is Stanley Ipkiss’s dog. He is a brown and white Jack Russell Terrier and he wears a chain collar along with having a small head. While wearing the mask, however, his collar becomes a spiked-collar, though it goes back to being a chain collar again and his head becomes large and green-headed. He is played by the dog Max and, like his master Stanley Ipkiss, is another wearer of the mask. He is loyal to his master and cares about him, but was afraid of The Mask at first because of his wacky behaviour and antics, though he does become loyal to him as well, which his owner’s alter-ego relays on him at times if he’s in a situation which requires his help.

Milo like his owner, is shy, sweet, kind and loyal to him. But he is afraid of his alter-ego The Mask because of his wild and unpredictable nature along with his cartoonish nature and insanity. Though over time, he does become loyal to him as he sees that like his owner, The Mask is kind and friendly like him, so he helps him in situations that requires his help, and even ends up wearing the mask at several times to help his owner.

Masked Milo like his master's alter-ego The Mask is wacky, fun loving and like him changes his appearance into something appropriate for the situation such as turning into a shark and a fireman. He cares and loves his master and also cares for other dogs as well when they were kidnapped by a fake dog catcher and will protect the people he cares about and like his master’s mask persona has a short attention span such as going after dinosaur bones even though he is chasing the fake dogcatcher who has kidnapped the dogs.

When he is wearing the mask in the animated series, his appearance is the same except occasionally in some episodes, his head is different. He often wears it to save his master's life and give it to him when he needs it. His collar in the film was a spiked one, but he changes it to the one that his unmasked self wears. He is one of the few friends that Stanley and his master's alter-ego The Mask has, to the point that anytime Milo goes missing or is in danger, the Mask focuses on looking for him or to save him, and harming Milo is one of the few things that Stanley and the Mask agree on, as both of them take revenge on Pretorius for making them kicking their dog when under his control.

Milo and the mask

Milo Wearing the Mask in the Movie

Masked Milo showing he is cartoonish like The Mask.

Milo and his master 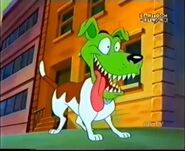 Milo Wearing The Mask In the Cartoon

Milo and The Mask watching over Chrono's plans.

Fighting off the villains. 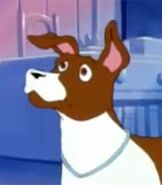 Milo transforms his green dog into a green bull’s head

Masked Milo as a spaceman
Community content is available under CC-BY-SA unless otherwise noted.
Advertisement