The Mask Wiki
Register
Don't have an account?
Sign In
Advertisement
in: Characters, Males, Comic Book Characters,
and 6 more

Edit
watch 01:54
Obi-Wan Finale - The Loop
Do you like this video?
Play Sound

Lieutenant Mitch Kellaway is one of the main protagonists from The Mask (Comic) in 1991 and the secondary antagonist in The Mask 1994 film. He is played by the American actor Peter Riegert in the movie and voiced by Neil Ross in The Mask: The Animated Series.

Lt. Kellaway, a hard nosed cop with an attitude and a pretty messy history with The Mask. After becoming Big Head himself and killing quite a few high-end mobsters, he got the attention of Walter, who wanted him dead.

After Kathy had killed Stanley Ipkiss, she decided to take the Mask to Kellaway for safekeeping.

Believing she was not of sound mind, Kellaway tried the mask on as a joke...and became the second Big Head. Kellaway as Big-Head decided to try to take down all of the big crime lords that had made his career a living hell.

Because he put on the not ordinary mask and it turn him into the green face Violent Iunatic called Big-Head the one has red eyes and huge teeth when it take control of him by making his voice sound funny but it teach him to slay criminals by giving him the law of his own hands because it knows he doesn’t like vigilantes.

After a while Big Heads methods got rather brutal and thus Walter, a giant of a man took a vendetta out against Big Head for killing his former employers. However, Kellaway as Big-Head does show that he is still a good-hearted man and can be reasonable at times, as he only kills the criminals who were after innocent people, and even spared a corrupt law attorney as well, despite leaving him terrified and scared of him.

Because of all the "shenanigans" and "going on's" the police start a hunt for the green headed killer, and after meeting up, Kellaway as Big-Head does show himself to be the one who tries to resolve things peacefully between them as he only wanted to bring justice to those who got away from the legal system, but the police decide to attack him instead, which he can see that things will not go peacefully as he wants them to be, so he decides to attack them instead.

During the inevitable fight between Big-Head and the police, Kellaway as Big-Head almost kills his partner Lionel Ray by putting a dynamite inside his mouth, but stops at the last second as he saw that the mask is trying to get control over him to make him kill his best friend. Realizing what he almost did, he fled the scene, then puts the dynamite inside him which it explodes, but he survives it and he buries The Mask in cement in his basement.

Kellaway is the target of the crime lords he previously hassled, he makes his way to the basement to retrieve the mask but is shot and put into a coma before he can do so.

The Mask Strikes Back[]

Kellaway comes back in "The Mask Strikes Back" and manages to find the four teenagers who are taking turns being Big-Head. He then tracks down Archie and Walter, but loses the mask after Walter gets frustrated when it doesn't work for him and throws it a long way into the distance.

Batman and The Mask Crossover[]

After the Mask shows up in Gotham, he is called in to help. He attempts to persuade Joker to give up the Mask, but fails. After removing the Mask from the Joker and having it handed over to him by Batman, Kellaway returns to Edge City to the grave of the original Big Head, Stanley Ipkiss, where he puts it beside the corpse of the man, telling both to rest in peace with utter sincerity.

Lt. Kellaway is the secondary antagonist in the film. He is portrayed as a short, middle-aged man with a dimwitted partner named Doyle. His personality through out the film is cynical, unfriendly and rude. After the Mask robs the bank and has been reported harassing Mrs. Peenman, he believes Stanley to be the culprit especially after finding a piece of Stanley's pyjamas that he had been wearing when he had previously been interrogating him. He follows Stanley to Central Park after he puts on the mask and attempts to woo Tina Carlyle.

He then arrested Stanley and had the other policemen search him. However they soon find a picture of his wife Margaret with her phone number on it that implies the Mask was having an affair with her, which made him furious.

The Mask manages to escape after distracting the rest of the force with his version of Cuban Pete and Kellaway licks his wounds saying to Doyle that this humiliation will put his work with the police force in jeopardy. Soon he sees Stanley being thrown out of a car with a green colored mask planted on him by Dorian Tyrell and his men to prove his suspicions correct. Soon they put him behind bars.

However thanks to Stanley's dog Milo, Stanley manages to escape from the prison and takes Kellaway at gunpoint to drive him to the Coco Bongo where Dorian who had kidnapped Tina and now had the mask in his possession, was going to to crash the charity ball.

Stanley left Kellaway handcuffed in the car and tied the radio round his neck to call for backup while he took care of Dorian. Kellaway was later freed just after Stanley had managed to retrieve the mask and stop Dorian once and for all.

When Stanley went to leave with Tina, he was stopped by Kellaway who then collided with Mayor Tilton. Kellaway then responded rudely; "Watch it, Chunky!" He then discovered his mistake and tried to apologize, but Tilton was furious and demanded to know what was going on. Kellaway told him that he was arresting the Mask, but Tilton affirmed that Dorian had been the Mask all along and was grateful to Stanley for saving them. Doyle attempted to shake Stanley's hand, but was scolded by Kellaway for it. As Stanley and Tina, along with Charlie Schumaker leave, Kellaway saw the mask in Milo's mouth and tried to tell Tilton; but the Mayor told him to leave Milo alone and said that he wanted to see him in his office first thing tomorrow, presumably for his rude behavior and the false arrest of a citizen. Kellaway reluctantly agrees.

Lt. Kellaway's personality in the Animated Series is much the same as both the movie and the comics, his appearance is similar to his original comic counterpart.

He thinks the Mask is a criminal menace to Edge City, believing that every big crime and disaster is caused by the Mask (while most of the time it isn't) and that he's linked to other criminals and villains, though the Mask saves his life and the citizens of Edge City various times. He also has a terrible temper as seen in the episode Flight as a Feather when his face goes red with rage and the sound of a boiling kettle whistling is heard (a reference to the expression "Rage boils over").

With Doyle, he keeps attempting to capture the Mask and prove that he and Stanley Ipkiss are one and the same but often fails and he always becomes a frequent victim of the Mask's atomic wedgies. According to himself, he has to change three new pairs of underwear a week and often lamenting that underwear is not cheap. Like in the film, he sees a picture of the Mask having an affair with his wife Margaret, which infuriates him even more.

There are times when Kellaway goes overboard, showing himself to be a bullying hoodlum as in the episode 'They Came from Within', acting like a school bully by picking up Stanley's magazine.

However, over time, he starts to accept that the Mask is a genuine hero despite his wild and chaotic nature, and it is implied that he is starting to see the Mask as a friend as he gets invited by him along with those that the Mask sees as friends.

Kellaway's Mask persona is violent, sadistic and genuinely insane, as he takes pleasure in hurting people who made his life difficult, even engaging in acts that broke several laws. But he does have a good heart, as he does have genuine good intentions in keeping innocent people safe and protected, along with the fact that most of the people he attacked or killed were criminals, and shows that he can be polite as well, despite his violent nature, as he speaks like a well-mannered gentleman towards to the Italian man after saving him from thugs that attacked him. He can be merciful as well, as he spares a corrupted law attorney and instead breaks open a vault that has the evidence to expose him, while leaving him still terrified and a nervous wreck. He also cares about his unmasked self very much, as he stands up for him, and tells them that they given him unfair treatment, along with firing him for no good reason as well. He also has self-control, as he doesn't attack the police and generally shows himself to be surprisingly a calm, laidback guy who is also cartoonish and is aware that he is in a comic book, as well, as he tells the reader off for figuring out where the evidence is instead of him. He shows himself to be smart as well, as after he picks up a phone, which he orders a pizza to who he thought to be the pizza delivery, which it turns out to Kathy and after he hears her voice on the phone, he takes his face off, so that his unmasked self can talk to her instead and not letting her know that he is out.

Kellaway in the movie.

Kellaway in the cartoon series.

Kellaway and Doyle at the end of the movie.

Kellaway and Doyle both wedgied by the Mask 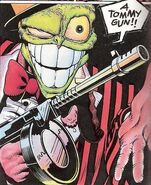 Kellaway as Big Head in the comics with a Tommy Gun

Kellaway wedgied by the Mask 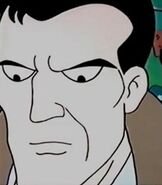 Kellaway's ancestor during Edge City's colonial era next to Doyle's ancestor and Mrs. Peenman's ancestor in the background during the season 2 premiere, A Comedy of Era. 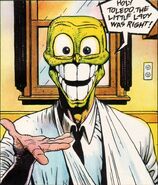 Kellaway becoming Big Head for the first time in the comics. 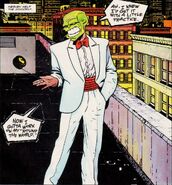 Kellaway receiving the mask in the comics

Mitch's wife Margaret in the film.

Lt Kellaway and Doyle Stumble upon the Mask