The Mask Wiki
Register
Don't have an account?
Sign In
Advertisement
in: Pages using duplicate arguments in template calls, Characters, Females,
and 6 more

Peggy Brandt is a character from The Mask and she is played by the American actress Amy Yasbeck.

In both the movie and the cartoon, Peggy is a reporter. However, while she betrayed Stanley Ipkiss to Dorian Tyrell in the movie (and was killed in a deleted scene) she plays a main character and is Stanley's best friend in the cartoon.

Peggy is the only other woman in the cartoon to wear the mask besides Evelyn.

Peggy returns in the animated series as Stanley's friend. She replaces Tina Carlyle in the series and is the only one, besides Milo, to know about his secret identity as The Mask. She is a reporter for the "Just For Facts" tabloid newspaper where she writes articles about the recent disasters and events surrounding the Mask and various paranormal and strange characters and villains.

Peggy is obsessed with making it to the big leagues as a big-shot, Pulitzer Prize-winning reporter and at times, risks her life, and sometimes Stanley's to help her get another scoop for the newspaper, even going as far as releasing any captured villain to make a news report about.

Although Peggy can be cocky, she acts as as an ally to Stanley in helping him defeat any villain who threatens them and Edge City, even giving him info on the current threat and situation that is happening.

In the pilot episode, The Mask Is Always Greener on the Other Side Part One, Peggy encounters Stanley about the Mask's failed attempt in stopping the bank robbers with her copy of the Just The Facts newspaper and attempts to reconcile to a briefly angry Stanley over her selling him out to Dorian Tyrell's gangsters, referencing her betrayal in the movie and connecting the TV series' continuity with the film's.

In another episode Counterfeit Mask, Peggy gets her chance to put on The Mask, when Stanley ends up in trouble as he accidentally took a suitcase full of money and his dogs ends up being kidnapped by the woman with it, along with getting in trouble with Mrs Peenman as well, so he tells her get it for him. She goes to his apartment and finds it, but decides to put it on just for once, so out of curiosity, she puts it on and she becomes a British, staid, polite, but egotistical woman who constantly demands to have her appearance to be perfect even to the point of having it more important than saving Milo.

Peggy goes to a hairdressing salon and throughout it all, has the staff to get all the knicks out of her back, get her toenails cut right and finally demanding to have her hair to be extra fluffy. She change her unmasked self's clothes to a flowery dress and a flowery hat as well, which she takes her mirror out and asks it who is the fairest in the land, but it explodes so she decides that mirrors do not know anything at all.

Peggy breaks the fourth wall and tells the director that she is ready for her makeup and she zooms over to her large pink car, which Stanley asks her that he thought that she wanted to help him with the story and she tells him that she doesn’t need the story as she is the story. She drives off and later on takes the hairdressing salon with her, saying one never knows when she needs another beauty makeover. Then she gets stopped by Kellaway and out of being a wacky woman, decides to marry him, but he rejects her, so she puts him on a cannon launcher, telling him to consider it a divorce loudly. She decides to take Stanley with her, deciding that he is the only one who understands her and she drives both of them to a top of the building which after she checks herself on a mirror sees a crooked eyebrow, and she screams out in horror at the sight of it. She decides to bring out a large tool for Stanley to use so he can take her face off and he does, bringing Peggy out in the open again.

As the Mask, Peggy is a vapid and vain woman obsessed with appearance like getting herself a make-over almost constantly to the point she chains the spa to the back of her car and drags it with her in case of an emergency. She also has an English accent and reminds herself constantly that she is beautiful and attractive.

Peggy is polite and staid, as she tends to be more control in her actions unlike most, and is very fussy about her appearance, to the point that she becomes demanding and even taking out a mallet hammer when a female staff member didn't get all the kinks out, but she does show herself to be harmless like Stanley's and Evelyn's mask personas, as she only causes goofy and harmless chaos like them.

Peggy does care about Stanley even telling him that he's the only one to understand her and despite being vain agrees to have her face take off after seeing an ugly eyebrow on a mirror. She wears the same clothes as her unmasked self first but she changes them to a dress with flowers on it with a hat on top of her head. She’s also fussy making sure to get all the kinks out of her back, her toenails not to be cut short and demanding for her hair to be made extra fluffy.

Peggy Brandt in the film.

Peggy meeting Stanley in the film.

Peggy meeting Charlie in the film.

Peggy Brandt in the cartoon. 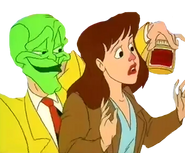 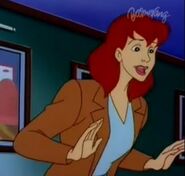 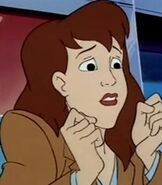 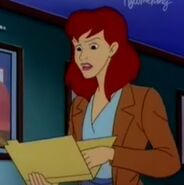 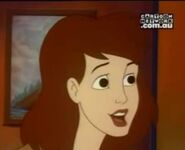 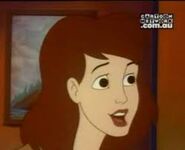 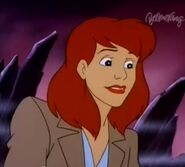 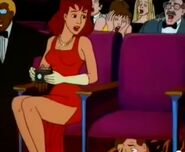 Masked Peggy Brandt in a flowery dress and a flowery hat.

Masked Peggy in her unmasked self's clothes and saying "a star is born!".

Masked Peggy driving her car and waving politely to anyone that she’s driving past through.

Peggy's ancestor in colonial era Edge City in the season 2 premiere, A Comedy of Era. 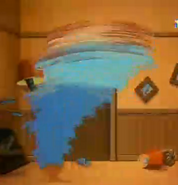 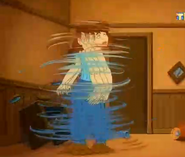