Start a Wiki
Dak also known as Putty Thing from The Mask: The Animated Series, is a villain and one of The Terrible Twos.

Dak appears for the first time along with Eddie in The Terrible Twos, reading comics in a slushy store. They are kicked out by Kellaway, stating that the place wasn't a library and that boys like them ruin the world. The boys decided to become a superhero like their idol, Insector The Bugman, by taking a bug with them into a nuclear plant to mutate, and then give Kellaway a lesson. After getting radioactive, both realize that they have forgotten the bug and then both faint. An ambulance arrives to take them to a hospital but in the way the ambulance crashes, causing their stretches to fall and then and into tow different shops. Dak falls into a spackle shop and mutates to a  putty monster, Eddie falls into an aquarium and mutates into a humanoid fish. While Dak has the ability to shapeshift and harden his body at will, Eddie doesn't have any special powers. To cheer him up, Dak takes him around the city to destroy things until they are confronted by the Mask in different occasions. Finally, they encounter Kellaway and as Dak was about to crash him, The Mask threatens to cook Eddie if he doesn't release the cop. After Kellaway is freed, The Mask throws Canola Oil to Dak, causing him to melt. After trapping him in a jar, the police arrives and takes the two mutants to jail.

They both escape in "Martian Mask", where they part off in a road trip to the beach, so Eddie can be in his element. They trip is interrupted by the Mask, who constantly tries to stop their journey. During a fight, their cars fall to the sea. Dak's body becomes unstable with salt water and after discovering Eddie can't swim despite being a fish, they are both easily captured and taken back to custody. 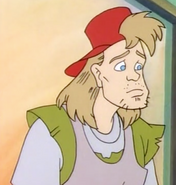 Dak as a Human
Add a photo to this gallery

Retrieved from "https://the-mask.fandom.com/wiki/Putty_Thing?oldid=16665"
Community content is available under CC-BY-SA unless otherwise noted.