The Mask Wiki
Register
Don't have an account?
Sign In
Advertisement
in: Pages using duplicate arguments in template calls, Characters, Males,
and 2 more

Rick was a character from the comic series of The Mask Strikes Back.

Rick was fan of Big-Head along with Ben, Hugo and Archie who hung out at Archie's apartment.

He even wore a jacket with a picture at the back of Big-Head holding bombs and dynamite. He was horrified to hear of Big-Head's death and couldn't stop thinking about it. He went down to the docks of where the killer had been last sighted and found a mysterious jade colored mask.

When he put it on, he discovered that he had the looks, characteristics and powers of the original Big Head and went back to show his friends.

Whilst enjoying being Big-head, he ran afoul of Walter who was still seeking vengeance on the original Big-Head. Rick soon began to discover that he was unable to control his behavior with the powers it granted, especially when he threatened to kill an innocent child who merely came up to him for an autograph.

He returned to Archie's apartment and discarded the mask, saying to Ben it was too much to handle and he couldn't think clearly while wearing it.

Later Ben, Hugo and Archie all took turns in wearing it with bizarre consequences: Ben wore it to become a famous rock star but in the same way as Rick, he was unable to control himself with it's powers, Hugo was seeing the world in a terrifying nightmarish way when he wore it and Archie wore it to be a crime fighter but also had the same problems as Rick and Ben. They were also still being pursued by Walter and the police led by Lieutenant Kellaway.

Walter then tried to seize the mask for himself, but when it didn't work for him, he flung it far into the distance, much to Kellaway's annoyance, who had hoped to get rid of it once and for all. 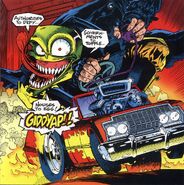