Start a Wiki
Stanley Ipkiss (aka The Mask) is the main protagonist of The Mask film and animated series. Ipkiss's job in the comic was never revealed, but in the film, he's a bank teller. In the film, Stanley is played by the Canadian actor Jim Carrey. In the cartoon series, he's voiced by Rob Paulsen. In the comic series he is a minor character and of a much different temperment.

Stanley Ipkiss is a shy, immature, and unlucky bank clerk working at the local Edge City bank. He is frequently ridiculed by everyone around him, except for his Jack Russell Terrier Milo, and his co-worker and best friend Charlie Schumaker. Meanwhile, gangster Dorian Tyrell, owner of the Coco Bongo nightclub, plots to overthrow his boss Niko. One day, Tyrell sends his beautiful, songbird girlfriend Tina Carlyle into Stanley's bank to record its layout, in preparation to rob the bank.

Stanley is attracted to Tina Carlyle, and she seems to reciprocate. After being denied entrance to the Coco Bongo, he finds a wooden mask near the city's harbor. Placing it on his face transforms him into a zoot-suited, green-faced, bizarre trickster known as the Mask, who is able to cartoonishly alter himself and his surroundings at will. Stanley scares off a street gang that attempts to rob him by turning a balloon into a Tommy gun, and then he exacts revenge on his tormentors.

The next morning, Stanley encounters detective Lieutenant Kellaway and newspaper reporter Peggy Brandt investigating the Mask's activity of the previous night. To attend Tina's performance, he again becomes the Mask to raid the bank, inadvertently foiling Tyrell's plan in the process. At the Coco Bongo, Stanley dances exuberantly with Tina, whom he ends up kissing. Following a confrontation with Tyrell, Stanley flees leaving behind a scrap of cloth from his suit that transforms back into his pajamas, while Tyrell is arrested by the police as a suspect for the bank robbery.

Based on the shred of cloth, Kellaway suspects Stanley to be the bank robber. Stanley later consults an expert on masks named Arthur Neuman, who tells him that the object is a depiction of Loki, the Norse god of darkness and mischief. The same night, Stanley transforms into the Mask and meets Tina at the local Landfill Park, but the meeting is interrupted by Kellaway, who attempts to arrest him. Stanley tricks a large group of police officers into joining him in a mass-performance of the Desi Arnaz song "Cuban Pete", takes off the mask and flees with Peggy, but she betrays him to Tyrell for a $50,000 bounty. Tyrell tries on the mask and becomes a malevolent green-faced monster. Forced to reveal the location of the stolen money, Stanley is kept hostage in one of the mob's cars while Tyrell's henchmen reclaim the money, and is later given to Kellaway, along with a rubber green mask, to be detained.

When Tina visits the despondent Stanley in his cell, he urges her to flee the city. Tina thanks Stanley for treating her with respect and tells him that she knew that he was the Mask all along. She attempts to leave the city, but is captured by Tyrell's enforcer Orlando and taken to a charity ball at the Coco Bongo hosted by Niko and attended by the city's elite, including Mayor Mitchell Tilton. Upon arrival, the masked Tyrell kills Niko and prepares to destroy both the club and Tina. Milo helps Stanley escape from his cell, and Stanley brings Kellaway as a cover and hostage in a desperate attempt to stop Tyrell.

After securing Charlie's assistance, Stanley is spotted and captured. Tina tricks Tyrell into taking off the mask, which is recovered and donned by Milo, turning the dog into a cartoonish pitbull who defeats Tyrell's men, while Stanley fights Tyrell himself. After recovering the mask, Stanley uses its abilities to save Tina by swallowing Tyrell's bomb and flushing Tyrell down the drain of the club's ornamental fountain. The police arrive and arrest Tyrell's remaining henchmen, while Kellaway attempts to arrest Stanley once again. Tilton arrives and debunks Kellaway's statements, announcing to everyone that Tyrell was The Mask all throughout. He then goes on to thank Stanley for saving lives and having Stanley free to go, then Tilton then tells Kellaway that he needs to have a serious meeting with him in the morning and all charges against Stanley are dropped. As the sun rises the following day, Stanley, Tina, Milo, and Charlie take the mask back down to the harbor. Tina throws the mask into the water, and she and Stanley kiss. Charlie attempts to retrieve the mask for himself, only to find Milo swimming away with it.

In the The Mask comic he bought The Mask in a antique shop as a gift for his girlfriend Katherine.

Stanley is a shy, immature, meekish, and good-hearted person who is usually unlucky and mistreated by people around him. He is the workhorse and victim of other people's selfish demands and harshness from his co-workers, neighbors and so-called friends like one of his best friends, Charlie Schumaker and his cranky landlady, Mrs. Peenman. Though with the help of the mask, he usually gets his own back.

Stanley hopes of one day finding the perfect girlfriend, but just like his Mask-persona, he's unlucky of getting one as a crazy event, usually involving the Mask and his enemies, ruins a date between him and his girlfriend.

Stanley appears normal but is actually suppressing very violent thoughts. He has festered intense grudges towards people over the smallest offense. After donning the mask, he begins to become more unstable and craves the mask, breaking in his ex-girlfriend's apartment to get it.

Ipkiss' Mask persona is a zoot-suited, green-faced, grinning, bizarre, wacky trickster with an energetic, hyperactive, zany, and wild personality who possesses powers with cartoonish, Tex Avery-style movements and humor. His famous catchphrases are "SssssMOKIN'!!" and "Somebody Stop Me!".

He has a short-attention span as he forgets about the most important tasks like defeating the bad guys and goes off on doing fun activities. In the TV Series' pilot episode, The Mask Is Always Greener on the Other Side Part 1, Mask successfully captures the robbers stealing from Edge City Savings, but forgets to tie them up for the cops as he is concern on finding Matilda, the security guard Stanley/Mask has a crush on, who run when scared by Mask when he came to stop the robbers, leaving the robbers to run off with the money.

Mask has an ego at times as he loves being the center of attention. He is sometimes viewed as a beloved celebrity in Edge City by the public, an excellent dancer and gentlemen who attracts the ladies during parties at the Coco Bongo or casinos. He's a showoff when wanting to be the top best dancer or winner of any contests. In the episode, Goin' for the Green, Mayor Tilton passed an Anti-Mask campaign after Mask humiliates him at the beginning of the episode and Mask tries to grab the people's attention, but failed. At the later part of the episode, he continues to get everyone's attention, to warn them about the giant swamp monster, created by Colonel Klaxon, attacking the city.

Despite his chaotic nature, the Mask does have a good-heart, since he is Stanley Ipkiss' persona. At the end of each episode, he does do the right thing of defeating the villains and saving the city and other people when they're in danger. For example, in The Mask Is Always Greener on the Other Side Part 2, when the Pretorius-controlled, walking House of Tomorrow was about to hit the Children's Hospital, Mask is shocked at it and went in to make the House to slip on a roller-skate and run off to the harbor, away from the hospital, saving it.

It also shows that Mask does care about children. In the episode, Sister Mask, the Mask does show he has morals on what is good and evil. When mind-controlled by Pretorius as a puppet, he is unwillingly forced to steal a variable meteorite fragment from a military base and attack the Army who's trying to stop them, the Mask tries to stop it as he truly doesn't want to hurt or kill anyone and wants to use Mask of Loki for good instead of evil. In the animated series, Mask follows the same personality as in the film.

His favorite hobbies are dancing and partying at the various parties and clubs like the Coco Bongo, one of his favorite places in the world, eating large quantities of food, watching action movies like the Mad Monkey or Rampaging Reptiles film franchises and harassing and pulling crazy antics on various villains and people who provoke him or torments Stanley, like giving them atomic wedgies, which is one of the running gags in the cartoon series.

Mask sometimes cause grief and stress to Stanley due to his trouble-making, like using his credit cards to buy expensive products like a new wide-screen TV or large amounts of pizza, getting into chases with the police and making them suspicious about his true identity and forgetting to stop the bad guys and go off on doing something that is fun for him.

Stanley's mask persona is insane and murderous. He is green-faced with especially maniacal and frightening facial gestures. He begins by killing a biker gang who beat him up, then murdering an old elementary school teacher for embarrassing him once in class years ago. After stealing the mask from his girlfriend Kathy one night, he goes on a bloodthirsty rampage, ultimately killing nearly a dozen police officers. Deciding to flee the city, Stanley takes off the mask before packing, but he is shot dead by Kathy, herself wearing the mask. 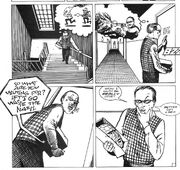 Stanley Ipkiss in the Comics

Stanley Ipkiss in the 1994 Movie

Stanley and his dog, Milo.

Stanley Ipkiss in the Cartoon 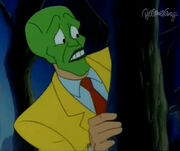 Add a photo to this gallery
Retrieved from "https://the-mask.fandom.com/wiki/Stanley_Ipkiss?oldid=15447"
Community content is available under CC-BY-SA unless otherwise noted.