The Mask Wiki
Register
Don't have an account?
Sign In
Advertisement
in: Characters, Females, Movie Characters,
and 2 more

Tina Carlyle is the deuteragonist of the 1994 film, The Mask. Tina is also a singer of the Coco Bongo, the ex-girlfriend of Dorian Tyrell and the girlfriend of Stanley Ipkiss.

Tyrell sends Tina into Stanley's bank to record its layout, in preparation to rob the bank. Stanley is attracted to Tina and she seems to reciprocate, but he is unable to enter the Coco Bongo to see her perform.

When Stanley finds a mysterious mask and puts it on, he becomes a green faced superbeing who sabotages Tyrell's bank robbery and enters the Coco Bongo. At the club, he dances exuberantly with Tina, whom he ends up kissing.

Tina then visits Stanley at the bank and tells him that she had a great time at the club and would like to see this mysterious Mask again.

Stanley then meets her and Landfill Park where he wears the Mask again, but their romance is interrupted by Edge City police lieutenant Kellaway. Tina then flees before the police can question her.

Later, when Stanley is arrested by Kellaway, Tina visits him in prison. There, she assures Stanley that she actually liked him even without the mask because he was the one man who saw her as a person, not an object. Stanley encourages her to leave the city, but is captured by Tyrell's men. Tina is forcibly taken to a charity ball at the Coco Bongo, where Tyrell prepares to destroy both the club and Tina with dynamite.

After escaping the prison, Stanley enters the club and gets captured. Tina tricks Tyrell into taking off the mask, which is recovered Milo, while Stanley fights Tyrell by himself. After recovering the mask, Stanley uses its powers to rescue Tina by swallowing Tyrell's bomb and flushing Tyrell down the drain of the club's ornamental fountain.

At sunrise, Stanley and Tina discard the mask into the harbor and they kiss. 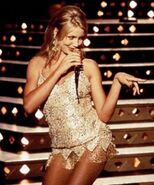