The Mask Wiki
Register
Don't have an account?
Sign In
Advertisement
in: Characters, Villains, Males,
and 4 more

Walter, the archenemy of The Mask, is a behemoth-sized mob muscle-man who never speaks (due to getting shot in the throat) and has taken a vendetta against Big-Head (The Mask) for killing his employers. With his seemingly immunity to pain, he is perhaps the only person alive who can fight anyone wearing the Mask and live.

Muscle-man (literally) for the crime lord known as Rapaz. He is silent and loyal to his boss. He is first introduced holding down a drug addict who squealed on Rapaz to Lt. Kellaway. Later, Walter intervenes when a man pulls a gun on Rapaz. However, the man reveals himself to be Lt. Kellaway as The Mask (or "Big Head" as the comics called him.) Walter engaged Big Head in combat, causing the living cartoon character to feel pain for the first time. However, Big Head was able to supposedly kill Walter by sticking electrical circuits from a broken lamp post into Walter's mouth. However, it is revealed that Walter is alive and well. He attacked and killed another crime boss who had put a contract out on Walter on the belief that Walter had betrayed them. After killing the mobster, Walter allowed himself to be arrested. He was eventually released thanks to corrupt District Attorney Steven Listor. Walter has come to clash with several wearers of the Mask and still manages to remain standing. This alone makes him a deadly force. One time, Walter himself got the Mask, but fortunately and for unknown reasons, it had absolutely no effect on him.

In the two part pilot episode, Walter is the right-hand man of Pretorius, and works for him at the start of the series. He is ordered by him to capture Stanley Ipkiss, and bring him to Pretorius, but however after Stanley manages to escape from Pretorius, Walter goes after him to bring him back to Pretorius. However Stanley manages to find The Mask of Loki, and puts it on, bringing out his alter-ego The Mask, but to The Mask's shock, he finds out that even his powers and abilities have no effect on Walter, to the point that he uses a cement truck to case him in. Walter even manages to break the mask in half an impressive feat, and is the only one that The Mask is genuinely scared of, to the point that he uses anything possible to get Walter somewhere else, instead of using his usual methods and antics to do that.

Walter's actual superpowers are his massive size and extraordinary endurance, which make him virtually indestructible. He has been shot, beaten, electrocuted, and possibly anything else in the book. Yet he still stands. Not only that, but his colossal strength is one of the few things that can actually cause pain to whoever wears the Mask. This makes Walter one the few biggest foes of Big Head who survives any encounter with him. Walter likes to use his immunity to pain to intimidate anyone with a weak stomach and will such as punching nails into his hand forming a happy face or cutting himself.

Besides his strength and durability, Walter is also a smart and capable tactician. During his campaign to become Mayor, Walter tricked his political opponents into killing each other. While he never did kill the Mask, he nonetheless triumphed over him once when he outlasted all of Kathy's attacks (who was wearing the Mask) until she just gave up and took it off.

In the animated series, Walter never seems to exhibit a personality of any kind. He seems to be characterized only by his mute pursuit of the Mask. On the one occasion he managed to acquire it, it failed to work. This may imply that he has no personality or soul. In the original comics, Walter has a sick sense of sadomasochism; performing self-mutilation to intimidate anyone with a weaker will. He never speaks due to getting shot once in the throat.

Walter as he appeared on the show.

Walter and Charlie Schumaker's ancestors in colonial era Edge City in the Year 1609 in the season 2 premiere, A Comedy of Era. 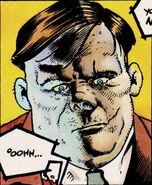 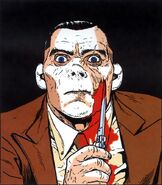